This most unusual but lovely story about two Cairn Terriers was recently posted on our CTRF Facebook page where it provoked a lot of discussion. Many of the contributors commented on the loyalty and feistiness of Cairn Terriers.  One person thought that the photograph was taken in 1972.  We just had to share it on our website:

Cairn Terriers Trussian and Primula must be the world’s tiniest police dogs.

When policeman Staffan Holstrom takes his dogs on the beat he receives many smiles from the public of Stockholm.

About a week ago Trussian chased a known burglar through a house and trapped him in the garden.

He stated later that if it hadn’t been for the tiny terrier he would still have been at large. 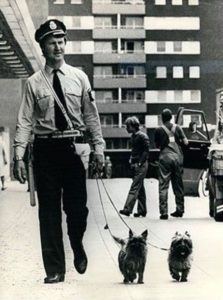