Eastenders fans may remember Betty, Pauline Fowlers Cairn Terrier. She was by her side in the programme for four years until Pauline’s fictional death in 2006.

Betty is now 15 years old and her 85 year old owner, Gwen Davies feared that she would have to give her up following a move into a retirement housing. Happily, the housing association has given Gwen special permission to keep Betty with her.

Those of you who have been involved with CTRF for some time will remember that Wendy Richards, who played Pauline Fowler was our patron for many years, until her death.

The full story is here (click on the article to enlarge): 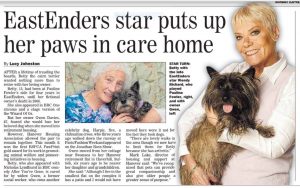